Because of the destruction of nineteenth century census returns, surviving land and property records from the period have acquired a somewhat unnatural importance.

Two surveys cover the entire country, the Tithe Applotment Books of c. 1823-38, and Griffith’s Valuation, dating from 1848 to 1864. Both of these employ administrative divisions which are no longer in widespread use, and need some explanation.

1 acre = 4 roods and 1 rood = 40 perches . Perches are also called poles or chains and equal 21 feet when referring to length and an area 21 feet by 21 feet when used to measure area.
So when you see an area in the records as 102 A 2 R 10 P this is in fact 102 acres 2 roods and 10 perches .
The irish acre was equal to 1.6 statute acres (English) . The origin of the difference goes back to Cromwell whose officials gave the impression that the allocations of land to its soldiers was less than it actually was.The Irish acre is equal to 70560 square feet whereas the statute or English acre is equal to 43560 square feet.The scottish acre is different again equalling 56250 square feet.
In modern measurements the old Irish acre is 16200 square meters or roughly an area 125 meters by 125 meters .

The smallest division, the townland, is the one which has proved most enduring. Loosely related to the ancient Gaelic “Bally betagh”, and to other medieval land divisions such as ploughlands and quarters, townlands can vary enormously in size, from a single acre or less to several thousand acres.

There are more than 64,000 townlands in the country. They were used as the smallest geographical unit in both Tithe Survey and Griffith’s, as well as census returns, and are still in use today. Anything from 5 to 30 townlands may be grouped together to form a civil parish. These are a legacy of the middle ages, pre-dating the formation of counties, and generally coextensive with the parishes of the Established Church, the Church of Ireland.

They are not to be confused with Roman Catholic parishes, which are usually much larger. In turn, civil parishes are collected together in baronies. Originally related to the tribal divisions, the “tuatha”, of Celtic Ireland, these were multiplied and subdivided over the centuries up to their standardization in the 1500s, so that the current names represent a mixture of Gaelic, Anglo-Norman and English influences. A number of baronies, from five in County Leitrim to 22 in County Cork, go to make up the modern county. Baronies and civil parishes are no longer in use as administrative units.

The parish was the smallest and most numerous unit in the administrative structure of the Catholic church in Ireland, and constituted an area within which a pastor or priest had care of the spiritual needs of the community. Parishes were associated with the monastic and episcopal church organisations and are obviously very old divisions. The Anglo-Normans were familiar with the parochial system and made few alterations apart from rededicating parish churches to universally acknowledged saints. Because of their spiritual associations the early Christian churches were rarely destroyed and their surrounds have been used as burial grounds up to the present. It is possible therefore to identify and map old church sites. The extension of the Reformation to Ireland disrupted the administrative structures of the Irish church. The armed conflicts of the seventeenth century and the suppression of the Catholic clergy further destroyed the continuity which had been maintained since early medieval times.

The old administrative divisions were adopted by the Protestant Church and were used as civil territorial divisions in the land surveys of the seventeenth century. The absence of a Protestant community in the greater part of the country meant that the old parish centres were neglected and failed to attract settlement. That is why today we find striking examples of isolated churches scattered throughout the countryside. Parish boundaries were described in detail in the Civil Survey and Sir William Petty selected the parish as a mapping unit in the later Down Survey. The surviving records of these surveys are important additions to our knowledge of the old parish divisions and their boundaries.

From the Reformation onwards the two major religious communities in Ireland had separate parish structures. The older parishes dating to medieval times and earlier were adopted by the Protestant Church. The Catholic Church, on the other hand, served an impoverished population and had lost its great resources of land and wealth at the Reformation. The great poverty of the population and the difficulty of finding suitable pastors ensured that the new parishes were much greater in size. Population growth in the eighteenth century led to the subdivision of large units. The evolution of the present day parish network of the Catholic church has to be seen in terms of population growth and had little to do with the preReformation parish system. That is why the majority of parish churches date from the early nineteenth century and are primarily located in villages or towns

The civil parish was used in a number of national surveys in the nineteenth century. In the early part of this century cash payments levied on land were substituted for the payment of tithe in kind. Tithe was a payment of a proportion of the produce of arable land made to the Protestant clergy and it was greatly resented as an unjust imposition by the Catholic population. The Tithe Composition Books which date from the 1830’s give details of townland divisions in parishes; the names of townland tenants; the acreage of their holdings and an indication of the quality of the land. Tithe Composition Books do not exist for the whole country. Because they were compiled either on behalf of or by local clergy they vary greatly in respect of information. The surviving parts of the Composition Books may be examined in the Public Records Office, Dublin. Civil parish boundaries were marked in the early Ordnance Survey maps and they were used as Census divisions and as sub-divisions of baronies in the Primary Valuation of Tenements c. 1850

and it may have consisted of one or of several tuatha which were divisions controlled by Irish septs. It is well to remember that the many new administrative divisions superimposed 9 on Ireland by invaders, were mainly based on existing divisions. There are a total of 273 baronies in Ireland. Data in a number of land surveys compiled in the seventeenth century, was collected on a barony basis. In the earliest of the great surveys connected with the Cromwellian confiscation the barony was utilised as the primary territorial division. The Civil Survey, for example, gives a detailed description of barony boundaries, landowners, land quality and settlement.

The barony was selected as a mapping unit by Sir William Petty in his monumental Down Survey which identified and mapped the lands confiscated by the Cromwellians. The barony was further subdivided into parishes and denominations, which correspond to the modern townland. Because of the existence of detailed maps of the barony, it was used as one of the territorial divisions by which lands confiscated during the late seventeenth century were identified. In this way the term acquired a legal title and was recorded in a great number of documents concerned with the ownership and distribution of property.

The Books of Survey and Distribution, which summarise changes in landownership for the seventeenth century, increase our knowledge of the internal divisions of the barony. County government in Ireland in the eighteenth and nineteenth centuries was the prerogative of the Grand Juries which consisted mainly of wealthy property owners. Statutes passed in 1759 and 1765 enabled the Grand Juries to levy a county rate to support road building. This cess or levy was paid by the barony in which the work was undertaken.

The Grand Jury Act of 1836 authorised the holding of presentment sessions in each barony and the barony was represented at the county-at-large presentment sessions. Apart from its loosely defined administrative role, the barony was also recognised as a legal division in which quarter sessions were regularly held. The barony was used as a census division up to 1901 but with the reorgani sation of Local Government in the post-Famine period and later, it was almost defunct as a meaningful territorial division.

In 1838, the Poor Law Act divided Ireland into 159 districts called poor law unions. A workhouse was established in each union to house the poor. Each union elected a board of guardians to administer poor law relief. 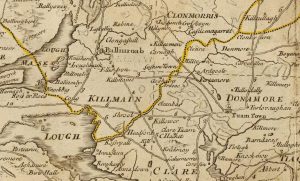 Initially there were 130 and eventually 163 poor law unions. Between 1838 and 1852, 163 workhouses were built throughout the country, each at the centre of an area known as a Poor Law Union. The workhouses were normally situated in a large market town, and the Poor Law Union comprised the town and its catchment area, with the result that the Unions in many cases ignored the existing boundaries of parish and county. The workhouse in the town provided relief for the unemployed and destitute, generally under very harsh conditions. Records were kept of the inmates and these can sometimes provide useful research material, where they have survived.

This website deals with records for the Ballinrobe and Tuam poor law unions almost exclusively .

The District Electoral Divisions (D.E.Ds) were originally established under the Poor Relief (Ireland) Act 1838 as poor law electoral divisions but their present names up to 1972 were fixed under the Local Government (Ireland) Act 1898. They formed the territorial units in rural districts for the election of members of Rural District Councils.

The equivalent territorial unit for the purpose of elections in county boroughs, municipal boroughs and urban districts is the Ward. In the larger urban areas there will be a number of Wards but in the smaller urban areas the entire urban district acts as a Ward. In 1973 new district councils were set up and these 26 districts were subdivided into 526 Wards which were in turn grouped into 98 District Electoral Areas for local government elections.

However, these District Electoral Areas and Wards are different in composition from pre-1973 D.E.Ds and Wards.

Edited for this site by Martin Ryan from various sources including O.S. Maps