Many Royal Irish Constabulary (RIC) barracks around Ireland were burned by the IRA in 1920 to get the police out. It is not certain that the burning of Shrule barracks was officially authorised by the IRA. Some of the quieter RIC barracks, including the one in Shrule, had been closed and were about to be re-occupied by the Crown Forces. Volunteers from Unit 2nd Western Division were involved in the burning.

Some volunteers stayed on lookout while John Joe Keleghan and Jim Murphy went into the barracks to set it on fire. There was a big bang or tremor and the doors shut, trapping them inside. It is believed the RIC may have put explosives under the stairs when they left to escape the IRA. The volunteers used too much petrol and their clothes caught fire. Jim Murphy was badly crushed in the explosion. He survived, but was left with lifelong injuries. While the barracks was burning, Jim Egan (Shrule) went in and helped pull them out of the fire.John Joe Keleghan & Jim Murphy hid down by Cloonbanane river to avoid being arrested.

Later Jim hid in Major’s tomb in Shrule graveyard before getting food and shelter in local safe houses. He did not go to hospital as he would have been arrested. A doctor used to call and dress his wounds. It is reported that John Joe Keleghan was disguised as a woman and brought to St. Bride’s nursing home for treatment. Military records show John Joe Keleghan received injuries at the time of the destruction of the RIC barracks in Shrule on the night of 16thJuly 1920. John Joe Keleghan received severe burns on his face, throat, neck, arms, body, legs and hands and also had deep wounds in the head, as if caused by the explosion of a bomb. The injuries were attributed to the fact that the deceased was caught in the flames and death was due to the effects of the burns received. He was removed to St Bride’s nursing home, Galway (known for assisting injured Republicans) on the morning of the 16thJuly 1920, where he was medically treated.

John Joe Keleghan died there on the 28thJuly 1920.

John Joe Keleghan was regarded as a hero in Republican circles and was said to have sang a republican song the night before he died. Lots of Shrule families had members who were involved with the burning of the barracks, but for fear of retaliation from the Black and Tans they were never made known. An eye witness recalls looking into the burnt ruins of the barracks the next morning, saying “nothing could be seen but the remains of the Iron beds inside the barracks”. After the fire, a house in St. Mary’s Rd was used as a temporary barracks. This house is now owned by the Heneghan family.Jim Murphy escapes Black and Tans upstairs in Delia Frehan’s house. 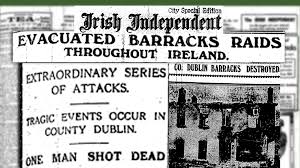 Delia Frehan was confronted and questioned by the Black and Tans to see if she had any information about the volunteers who were involved in the burning of the RIC barracks in Shrule. They threatened her by placing a grenade in her hand, explaining to her that if they removed the pin from the grenade that it would explode and kill her. Delia stayed calm when questioned and gave them no information. The Black and Tans eventually believed her and left without any violence. They never realised that Jim Murphy was hiding under a bed upstairs. Up until the early 1960s there was a doorway that was possibly hidden in Langan’s shed that opened onto Frehan’s back garden.

The ‘lads’ [Volunteers] would use it as an escape run when they were in Langan’s pub, or when danger was approaching. They would come through Langan’s and then out into Frehan’s yard and back to the Graveyard.Edward McCarthywas a manager of Congested Districts Board (CDB), a Sawmill which was located at the head of the bog road in Dalgan. John Joe Keleghan occasionally took on contracts to fell trees for CDB. The local business was one of the few businesses in the area that would have used petrol. Edward was questioned if he had any knowledge as to where the volunteers got their petrol.

The Black and Tans burnt the Sawmill. The chimney of the Sawmill still remains standing today.Following the 11am Mass this Sunday 26thJuly, there will be a brief ceremony in Shrule Cemetery where the proclamation will be read followed by a laying of a wreath of John Joe Kelleghan’s grave. RIP

Historical SGK would like to thank Gerry Petty and others for his research and putting this article together to acknowledge our past.