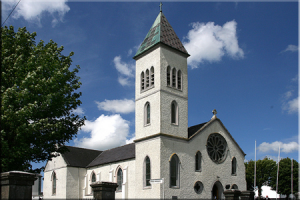 Originally a protestant church ,  this church was transferred to the Catholic faith by Mrs Mary Kirwan of Dalgan Park , in 1829 . At her request on coming of age and converting to the Catholic religion .

The church underwent major renovations by Fr. Henry Feeney in 1938-9 . Reroofing , a new extension and removal of the old square tower . The construction was carried out by local families , each sharing in the completion of the labour.

The opening of a new national school in Glencorrib in 1854 helped to focus attention on the needs for a church in the same general area. Shrule’s third parish priest Fr. Michael Phew (1847-1866), a native of Rostaff, was the moving spirit in providing the school. But it fell to the fifth parish priest, Fr. John Goode (1867-1885) to provide the new church. A generous site had been donated by the local landlord, Colonel George Ouseley Higgins, M.P. for Mayo. His father had acquired the formerly owned by the Dillon-Browne family and had lost through bankruptcy. The Higgins family also acquired the Dillon-Browne residence, “Glencorrib Lodge”, a residence, which had begun to give its name to the local townland, which it still does, though the Ordinance Survey refuses to recognise the change.

Colonel Higgins might have been expected to be less than favourable towards the clergy, seeing two priests had campaigned actively against in the 1857 Mayo election causing him to lose the seat to the popular George Henry Moore, of Moore Hall, Ballinrobe. Higgins, however, lodged an objection. Moore was unseated in favour of Higgins, who, possibly mollified by his victory, donated the generous site, of one acre, one rood and twenty five perches. The lease, dated March 1st 1876, was for ninety-nine years. The church, built in 1876-1877, enjoyed a central site across the road from the other parish amenity, Glencorrib National School, erected twenty years earlier.

Colonel Higgins died in 1874 at his London residence in Belgrade Square. At his death he donated large sums to charity. Margaret Higgins, a Sister of Charity in St. Vincent’s, put funds at the disposal of Fr. Goode to erect a new church in memory of her brother. The plans for the church were by Mr. John J. Brady, of St. Francis Street, Galway, who also became the contractor for the building. Responding to calls from the Bishop and from Fr. Goode, the parishioners gave their labour in drawing stones, sand and lime, to the site.

In design, the church is in the Gothic style of architecture. The main internal feature is the Pugin style roof, with open trusses, over an interior divided into nave, chancel and sacristy. An external feature is the additional two cut-stone buttresses on either side of the main entrance. An extension made in 1944 increased the size of the church and gave it a more balanced appearance. A new two-storey sacristy was added, allowing ample storage space in the upper storey. The main church is lit by ten lancet windows.

In 1963 a half-ton bell was donated by John Harte, of Mount Henry, in memory of his deceased brother, James. Where it would be placed caused much debate, before the eventual decision to mount it on a free-standing bell-tower towards the front of the church. In 1999 the community erected a millennium memorial shrine to Our Lady and Child, called “The Madonna of the Wayside”, to the left of the bell-tower and the front entrance. The bronze-coloured figure is based on a group by the Italian sculptor, Feruzzi.

On May 6th 1875 the foundation stone was laid for the new church of The Immaculate Conception Glencorrib. Dr. McEvilly, Fr. Peter Dooley V.G. (a local man) Father Goode, PP. and Kiennan were present along with 2000 people. It was beside the residence of Colonel George Gore Ousley Higgins MP. for Mayo who died in Belgrave Square on 8th May 1874. He was regarded as a good landlord. His sister, St. Vincent a member of the Order of the Sisters of Charity, Cork gave the money to Fr. Goode P.P. to build the church in Glencorrib in memory of her brother.

Fr. Goode called on the parishioners to draw stone, sand and lime. He had already provided the parish with three fine male and female schools. The church architect was John J. Brady who planned a building for one thousand people. It would be in Gothic style with an open Pugin roof. Brady of Francis St. Galway, was also the contractor.

In the morning the Bishop said mass and preached at Shrule. Then he went to Glencorrib where a marquee and triumphal arches were erected. The Galway Industrial School Band under Fr. Kiernan and Herr Ulle played tunes. A guard of honour of little girls waved little flags and chanted — “Welcome to our good Lord Bishop“. There were banners to the BVM, The Immaculate Conception, St. Joseph, St. Patrick and Pope IX.

While Fr. Kiernan was saying the Mass the band played. The laying of the foundation stone took half an hour and under it were placed coins of the year and a parchment with details al the event. The Bishop used an inscribed silver trowel: “Presented to His Lordship most Reverend John McEvilly, Bishop of Galway, on the laying of the foundation stone of parochial church of The Immaculate Conception, Glencorrib Shrule, County Mayo by the Rev. John Goode, P.P.”

As it was Ascension Thursday, the Bishop first spoke on the feast. He praised the liberality of Colonal Higgins and asked al to pray for him and his family. He asked the people to give free labour and other help as they should make their contribution too. He then spoke at length on Sunday drinking.

The band went in a bus to Shrule followed by 30 vehicles and many pedestrians, the Bishop’s carriage bringing up the rear. The ceremony ended with benediction in Shrule at which once again the Bishop spoke — this time on devotion to the Mother of God.

About ten toasts were drunk.